What Is Crude Oil?

Crude oil is a naturally occurring, unrefined petroleum product composed of hydrocarbon deposits and other organic materials. A type of fossil fuel, crude oil can be refined to produce usable products such as gasoline, diesel and various forms of petrochemicals. It is a nonrenewable resource, which means that it can’t be replaced naturally at the rate we consume it and is, therefore, a limited resource.

Oil is called a fossil fuel because of its origins. It was created 400 million years ago when the remains of prehistoric algae and plankton fell to the bottom of the ocean. It combined with mud and then was covered by layers of sediment. The intense pressure heated the remains over millions of years. It first became a waxy substance called kerogen. It became liquid oil after more pressure and heat. That’s why it’s a nonrenewable resource. It would take millions of years for new oil to be created when this supply is gone.

Crude oil is typically obtained through drilling, where it is usually found alongside other resources, such as natural gas (which is lighter and therefore sits above the crude oil) and saline water (which is denser and sinks below). It is then refined and processed into a variety of forms, such as gasoline, kerosene, and asphalt, and sold to consumers.

Although it is often called “black gold,” crude oil has ranging viscosity and can vary in color from black to yellow depending on its hydrocarbon composition. Distillation, the process by which oil is heated and separated in different components, is the first stage in refining. 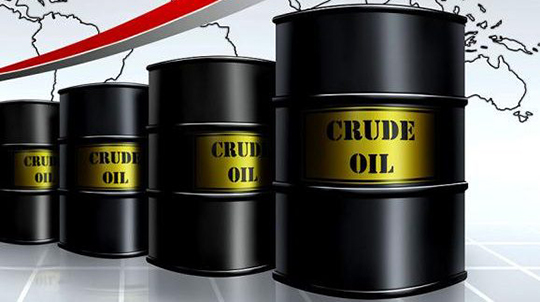 Light sweet crude is the most valuable oil because it is easier to refine or distill, and transport....
More