Bitumen, also known as asphalt, is a substance that forms through the distillation of crude oil. It has waterproofing and adhesive properties. Bitumen production through distillation removes lighter crude oil components, such as gasoline and diesel, leaving the “heavier” bitumen behind. The producer often refines it several times to improve its grade. Bitumen can also occur in nature: Deposits of naturally occurring bitumen form at the bottom of ancient lakes, where prehistoric organisms have since decayed and have been subjected to heat and pressure.

Bitumen is generally for industry use. Bitumen was first used for its natural adhesive and waterproofing characteristics, but it was also used as a medicine. It was used to bind building materials together, as well as to line the bottoms of ships. Ancient civilizations traded the material. Herodotus, a fifth-century BC Greek historian, claimed that the walls of ancient Babylon contained bitumen.

Bitumen is composed of complex hydrocarbons and contains elements such as calcium, iron, sulfur, and oxygen. The quality of material and ease of production depends on the source and type of crude oil it is derived from. The material is used most often in road paving. Most roads in the United States are made of either bitumen or a combination of bitumen and aggregates, such as concrete. Engineers replacing asphalt roads can reuse the material on other road projects. Manufacturers use it in the creation of roofing products due to its waterproofing qualities.

Under heavy loads, bitumen can deform permanently, depending on the composition of the asphalt mixture, the ambient temperature, and the amount of stress places on the material. Bitumen oxidizes, which can leave the asphalt brittle and result in it cracking. 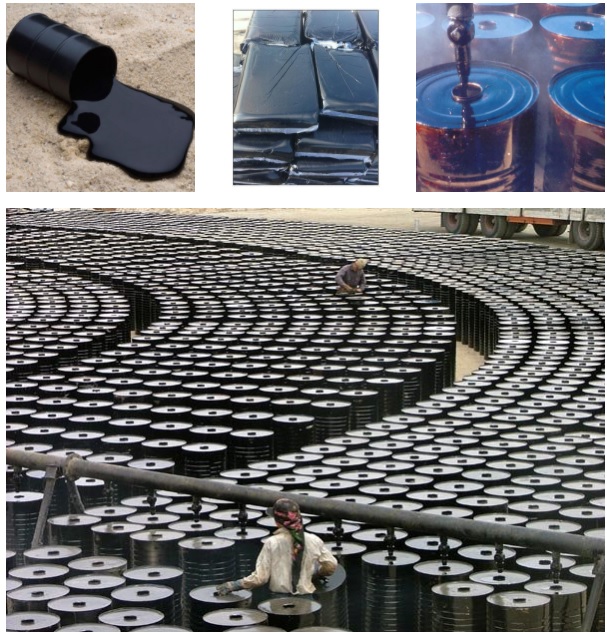